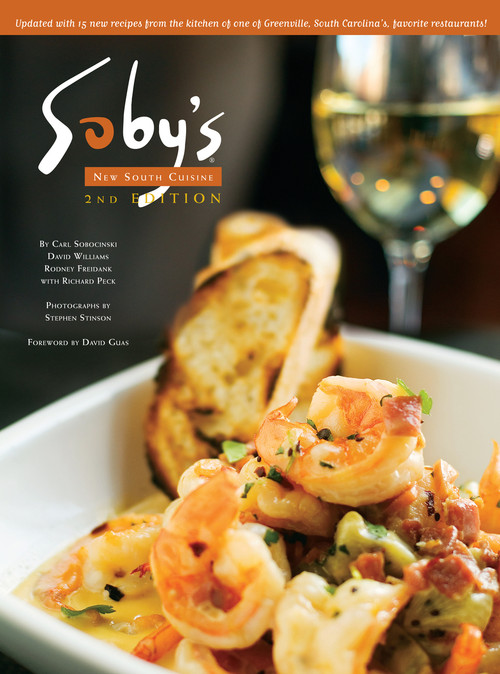 Soby's New South Cuisine 2nd Edition Cookbook is the latest version of our award-winning cookbook originally published in 2007. It is updated to include 15 new dishes with 35 new recipes, new photography and current information about Greenville.

Imagine enjoying Soby’s classics, both old and new, at home. The book includes original classics like Soby's She Crab Soup; Fried Green Tomatoes; Lowcountry Shrimp; and Applewood Smoked Bacon Wrapped Pork Tenderloin alongside more recent customer favorites like Spicy Pimiento Cheese; Marinated Heirloom Tomatoes; Lobster Mac and Cheese and Crispy Fried Chicken. If your family, friends, and guests haven't visited Soby's yet, after they try one of our recipes, they will understand why it has been an upstate favorite for more than 20 years.

The cookbook includes 219 four-color pages with more than 122 enticing recipes from the award-winning restaurant and 200 color photos. It also pays tribute to the Southeast and the nationally acclaimed revitalization of downtown Greenville, SC.

The 15 new dishes join content developed by the original authors Carl Sobocinski, Rodney Freidank, David Williams, Richard Peck and photographer Stephen Stinson to create a carefully curated list of recipes that have made Soby's a dining destination. The recipes are simple enough for a home cook to prepare, yet elegant enough to impress friends at any dinner party. To make each dish even more memorable, each recipe is accompanied by a suggested beverage pairing.

The book also tells the story of how restauranteur Carl Sobocinski opened Soby's in 1997 and transformed it from an old shoe store and how downtown Greenville has become a tourism destination since that time with unique restaurants, hotels, boutiques, art galleries, concert halls and parks.

Please note: Orders received after 12pm on Fridays will be fulfilled when the Table 301 Corporate Office reopens on Monday at 9am.

For any questions on purchased orders, or to order an item with priority shipping please call Allison Spann at our Table 301 Corporate Office Monday through Friday, 9am-5pm, at 864.232.7007 extension 130.

This product hasn't received any reviews yet. Be the first to review this product!